What I Learned After I Hit My Dog 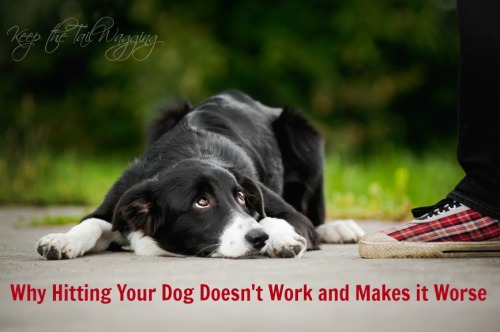 One night, before Rodrigo and Sydney were two years old, I was playing with them in the living room. The dogs were allowed rawhide chews back then because they needed something to curb their chewing drive and I couldn’t find anything else that was affordable that lasted longer than 10 minutes.

Read More About Alternatives to Rawhide Chews for Dogs

Rodrigo had a possessive streak back then and bit Sydney to get her rawhide, broke the skin of her ear. Without thinking, I slapped him on the nose and shouted “NO!”

Immediately after, I softened, horrified by what I had done, and brought him into a hug and apologized for an hour.

That night, I slept with the dogs. I wanted Rodrigo and Sydney to know that they didn’t have to fear me.

Since then, Rodrigo has shown his possessive side, and I’ve learned to have a commanding presence in my pack, and I can now read our dogs’ body language. When he’s going for one of the other dogs’ toys or bones, I simply say “Rodrigo, No” or “Rodrigo, Leave It” and he walks away. No shouting. No Hitting.

I came from an abusive background and in my community beating children was accepted (spare the rod, spoil the child). I grew up with a lot of anger and an inability to maintain relationships or manage conflict.

I share this not for sympathy, but to help you understand why I have such a strong reaction to people hitting their dogs as a form of training. When we hit them (or swat them), they're not making the same connection that we think they'll make. See Thoughts on Force Training from a Dog Trainer below.

And, no, that's NOT your dog's guilty face. That's your dog reacting to your tone, energy and body language.

In the Heat of the Moment

In the heat of the moment, we may lash out because of anger or fear. We have to learn a new way.

What helped me was learning more about dog behavior. Rodrigo and Sydney have lashed out at the puppies many times. There was one evening when Blue lashed out at Sydney. Each time, a firm “No!” immediately defused the situation and reminded all of the dogs that I’m their leader.

I was able to keep my cool because I didn't want to practice negative reinforcement training, which means using punishment to discourage “bad” behavior.

But I’ve Tried that, and My Dogs Don’t Listen

Yep, I’ve been there. It takes consistency and confidence to raise well-behaved dogs. And, ask yourself, do you want your dog to obey you out of fear? I don’t.

Hitting our dogs doesn't deliver the message we want to deliver, but don't take my word for it…

[Tweet “A dog who is afraid to move is incredibly sad. #donthityourdog #keepthetailwagging”]

What Hitting Does to My Dogs

Chakras are the energy centers located in a physical body. Positive reinforcement works with the heart(the ability to love and be loved) and crown (reasoning abilities) chakras.

Animals, children, as well as adults, connect [that] good things happen when you do good things. It allows for reasoning. Yes, animals are capable of reasoning. If you doubt this, place a favorite treat out of their reach and leave the room. See if that treat is still there when you come back. They act instead of reacting.

Negative reinforcement connects with baser instincts. Particularly the root (survival and protection) chakra. It puts the animal, child, employee in survival mode. They can become defensive. Defensive learning can lead to choices that simply avoid the punishment. Or being caught. Humans will lie, while animals may lash out and cause harm. They react rather than act.

What Should I Do Instead?

When Rodrigo Runs Off:  When Rodrigo runs off to explore the woods surrounding our home.  I don't panic. Yes, it's frustrating.  Especially when it's raining, I have somewhere to go, or it's dusk (coyotes), but I don't panic.  Instead, I call him calmly with “Back in the Yard!”  When he starts running, I smile, encourage him, and give him lots of love and praise.  If I were to hit him, he wouldn't understand that I was angry that he ran off; he'd think I was angry because he came back.

When Rodrigo Lunges at Cyclists:  Rodrigo is a Border Collie / Blue Heeler mix; his herding instincts when it comes to cyclists are too strong for me to train away.  Instead, I chose to allow controlled exposure to cyclists and joggers by walking him in areas where there are separate walking and cycling paths.  He can see the cyclists; he can get excited and bark, but he doesn't lunge, because of the 50′ (or more) distance).  Again, I don't get angry.  Instead, when he turns to look at me, I reward him with praise and love.  Now, when he sees a cyclist, he looks to me as in “hey, do you see it too?”  And I happily say, “yes!!!!”

In the above examples, it took months for me to train Rodrigo.  If you have an issue that requires immediate (or faster) resolution, I highly encourage you to reach out to a reputable, positive based dog trainer.

Thoughts on Force Training from a Dog Trainer

The biggest problem with compulsion/force techniques is the risk of unintended results. If used on a soft or anxious dog, or done poorly, incorrectly compulsive/force training techniques can cause aggression or fear issues.

The owner thinks problem solved – no more pulling. However, the dog makes a different connection.

After this outcome repeats several times, the once friendly prong collar dog learns that other dogs cause pain. He becomes reactive out of fear and anticipation of pain, whenever he sees another dog. The once friendly dog now lunges and barks which causes more pain.

A vicious cycle has begun.

Compulsive/force techniques can also cause fear issues resulting in a dog “shutting down.” When a dog shuts down, they'll stop moving and become very still. Owners mistake this for obedience, but a shutdown dog is incredibly sad. No dog should ever be afraid to move.

In my home, I’m top dog. I’m in control. I have the power. For me to then use that power to abuse my dogs – and hitting is abuse – is the opposite of being a responsible dog owner.

To hit, because I lack the power and I’m trying to gain it back, is not being a responsible dog owner.

There are so many options available to dog owners today; people who make a living helping us understand and communicate with our dogs. Before you hit your dog, think of the message you’re delivering and, please reach out to a reputable dog trainer. As Damien shared, a dog who is afraid to move is incredibly sad.

A book that helped me better understand how our dogs think is Think Like a Dog and Enjoy the Rewards.

Have You Called Your Vet?

I added this section after reading a comment about a dog's change in behavior that made me wonder if a health issue was the cause.

When I switched our dogs to a species appropriate diet of raw food, I noticed a change in Rodrigo's behavior.  He can still be aggressive in the right circumstances (we don't go to the dog park), but his reactivity and roaming have decreased significantly.  I think diet is a part of this change; consistent, positive based training is a bigger part of this change in his behavior.

A change in behavior can also be due to a health issue.  Dogs can't tell us that they're not feeling well, so we need to take cues from their appearance and behavior.  If a dog's personality shifts – take notice and take notes, then all your veterinarian immediately!

Please DO NOT hit your dog.

If you are abusing your dog, please find your dog a new home – you can contact local rescue or shelters to ask for help.  Then please seek counseling to help you work through your emotional issues.  I suffered from depression for more than twenty years; therapy and the love of my dogs were the only things that helped me reach the other side so I couldn't imagine hurting them.